is Yes now no longer so new, but due to illness and other things, the entry has shifted to already for 2 weeks. Sorry. 🙂

So, where do I start doing the best? Maybe so that Timo has simply fit in his crib so properly, and we we hoped that he would sleep better because of more space. Yeah, hope dies are known to last, but that of another story.

We have made us so smart in advance and advise us can be. Neighbors had recommended us to high, high beds and I can say that this recommendation of gold was worth. Who is in the vicinity of Düsseldorf, may even look in the shop and know what I mean: very good advice, good assortment, reasonable prices. A store you would want so well in so many other industries. 🙂

Our choice much in any case on a large bed, the company "Lifetime", because we are convinced by the concept, and especially because it was visually convincing.

Ordered in November, it was delivered then so a fortnight ago. The joy when Timo was great: 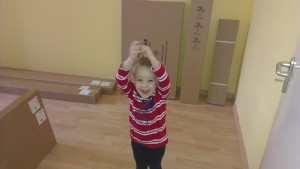 With me also, because now we had time to build the bed together one afternoon. So a 'proper' Daddy son time.

The structure worked actually also makes it easy if I me not something "stupid" would have done at one point. And I built vertically along the bed, as described by the Chief of the high, shop: 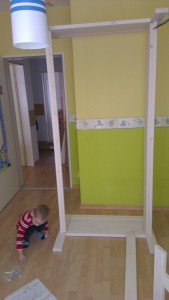 And then "upset", but then only found that I had installed a Board upside-down. When resolving the error the whole bed has fallen then apart, because it was not completely screwed on one side. In panic, that Timo could be slain by his own bed, I referred loudly of the room him. The fact that I would have to build which was in absolute angle, now completely alone a 2 metre bed made me a bit of despair. This I not properly read the Guide and Timo repeatedly asked where that was a screw, with which he has played. Began his answer always with "because…", which showed me that we but have been stuck in the "why" phase, only the "Where" asked Timo. Well, one incidental finding and ultimately we have found all the screws.

A bit "reconciliation" came up again when I Timo let screw down one side of his latte grate. With shining eyes, he waited always until I have before more or less just screwed the bolt and then solemnly passed him the Cordless screwdriver. 😉

That was quite a few screws, you can see: 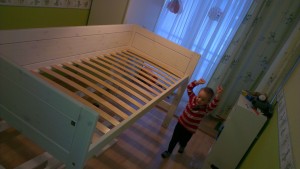 Then the Rau case protection on it and the mattress came in at the end and finished the new bunk bed: 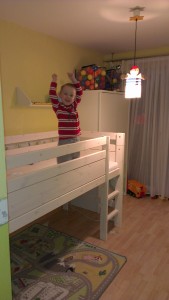 All in all quite straightforward and quite high-quality, processing as opposed to baby furniture we had at that time bought for Timo.