I know many of you have been eagerly waiting, the report detailed how it now so by give went. But the events of recent days have consumed quite nicely on my reserves (no sleep reserves, yet all the same is FAT ;-)).

But the number of times after.

It came at the time…

Once upon a time…

Oh, no, the false start.

Last Saturday, after the celebration of Timo birthday (we were with in-laws together in the afternoon on the children's farm), we all went there one by one in the bed and thought so with us: well, too bad the timing here, Saturday would have been super, because grandparents on him watch it ja Timo might have.

Well, I was felt 20 minutes in bed (there were probably less than 2 hours), since I have run my "sphere" by the room (it was now night 12: 30). When she again decided, lie down I asked even so: "and? All right? "." And the answer was only dry: "I go Yes, right into the tub, see whether the proper contractions are".

Good that we had no light, with the down side jaw would have I looked so pretty stupid but just the thoughts through my mind went me: "crap, why now?" I wanted to sleep but still a bit""Oh great, now that I have it with the stomach." I had spoiled namely at dinner before probably somehow easily stomach me, and was therefore quite weakened. But the birth process keeps you just ain't on, so eyes and through. "" I then let water into the tub and monitors that Tala cycle they down does it, would she "admitted to water" is 🙂

And after approx. 30 minutes the certainty: there are contractions. But probably very "light", because as fit and quietschen hilarious she is not looked at the first child when I arrived at home.

Still have the mandatory followed "I believe the broke", what happened to luckily this time not at the supermarket checkout.  😉

So we have Tala's parents know given that now we go and we then go to hospital. The local investigations showed ruptured amniotic sac, but very firm cervix. The midwife, originally from Berlin, with the same last name as we said then: "They go home and try to sleep when we go then, Yes, a quick phone call is enough a little." We had understood that so that we both should go home and in my mind's eye the wildest nightmare scenarios ran off with birth in the car and so on, because one was times clear: last time it also didn't really last long after the rupture.

OK, I'm so against half past four home, have placed me with clothes in the bed, that cell phone right next to me and on full volume. Then I turned off for the first time receiving data on the phone, because I was torn by a stupid spam mail from half-asleep (not for the last time on this day).

I guess really for approx. 20 minutes away slumbered, but after I woke up then, I could no longer sleep (who could that even in such a situation). At 5:48 then phoned the hospital, with the words "your wife need you here." (what for a stupid saying actually, a "dat kid kütt" had also done).

Well, I'm rushed record-breaking within by 9 minutes to the hospital and been redirected directly in the delivery room. My wife in pain lay there whimpering on the side. Before I could really take off my jacket, already the midwife came in and said that it would be yet more practical if the pants off would be to birth (which my wife of course). After we that had done (I got tackled it with, the midwife was so narrow, I thought, I'm helping times), 3 labor and our son was still came to the world. Just in time to 6:05. If you look at the times so, then is aware of one, that for example my phone much longer would have allowed ring, or else get something in between.

Sunday I spent then morning half asleep after I, while I was trying to sleep, one hour 20 minutes later again was torn from my phone from sleep. Afternoon, Timo was allowed to take his little brother in appearances. Because they had tested positive at tini RS viruses, she no longer allowed to leave the room and had to wear a mouth guard. I was expecting so no earlier than Wednesday as a day of the release.

When I arrived home alone then with Timo, he got a crying fit, because he didn't want his mom here, ASAP, please and thank you. At this time, I was so tired that my emotions even beautiful unfiltered forced their way up in the form of water droplets from'm head. That irritated Timo somehow completely. Suddenly, he stopped crying and asked why I was so sad. I said, I'm tired and sad, because he is so sad. Then he said, I need to be sad, everything's going fine &lt; 3
I replied that Papa is likely Yes sometimes cry, which was categorically rejected by him. Well normally it is Yes also so 🙂

On Monday, I have then awakened Timo and measured directly times fever, because somehow "Spanish" were me his schniefende nose and the fact that he slept so long. The increased temperature within 2 hours from 36.9 to 37.2, read me no good idea. But, because with the temperatures is proven to be "a fever", I got Timo in the kindergarten and drove himself to the Office.

No 1 1/2 hours later called his supervisor, he has 38.5 now and would have to be picked up. At the same time I learned on work that a system for which I am responsible, had completely failed. Yet the news that tini was dismissed on Tuesday came. That was the absolute overkill of news.

I am always between soft-soiled baby and work laptop and jumped her and a neighbor said at the end of the day, whether she could watch for half an hour on our "big" sleeping child, so that I can ever bring the stuff for Mika to tini. This worked amazingly well and I then right on time in the bed, because I've noticed that the battery was empty.

Yesterday then we could pick up Mika or "Mama" from the hospital and Timo was able to the first time driving his brother and then keep: 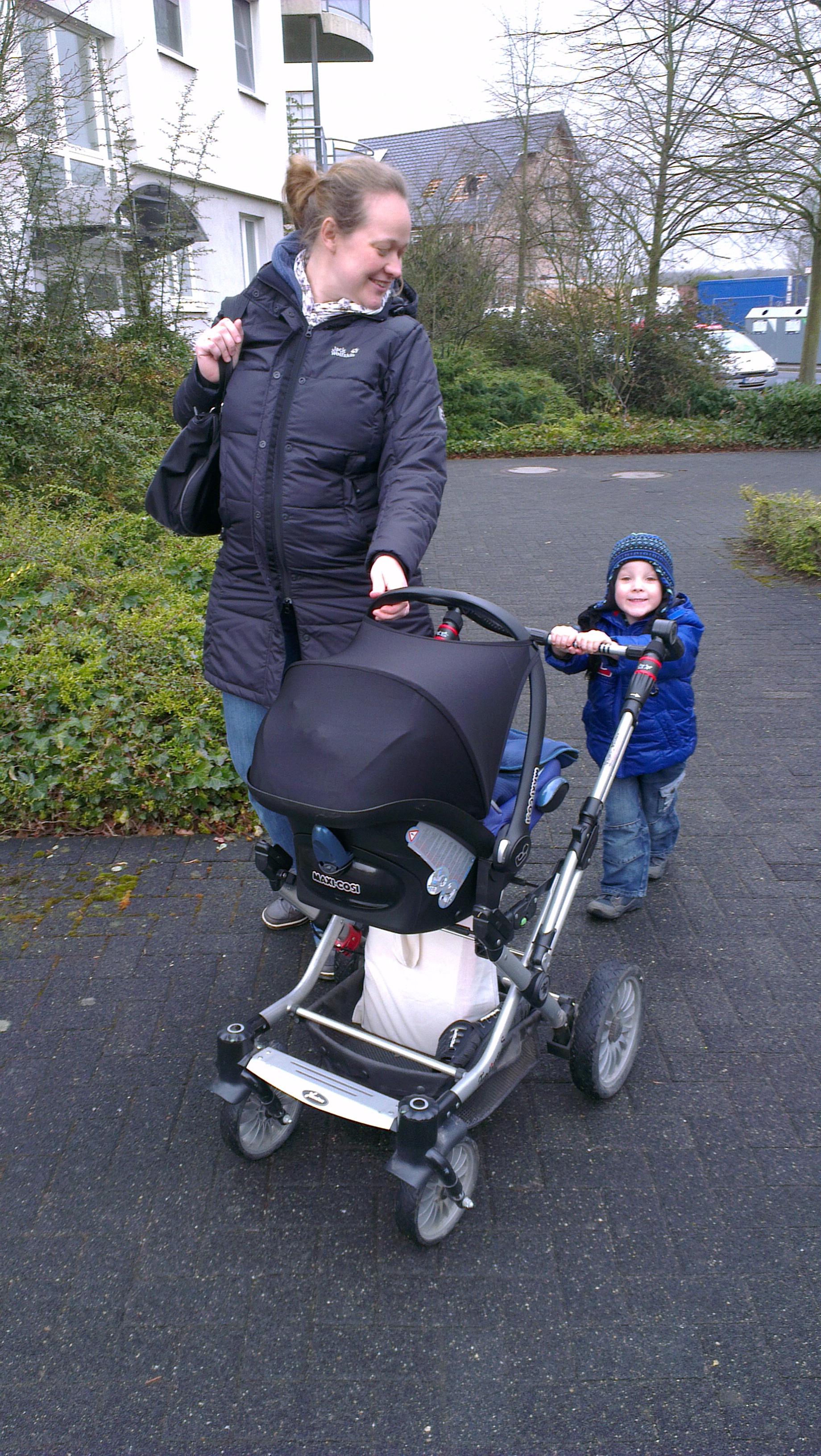 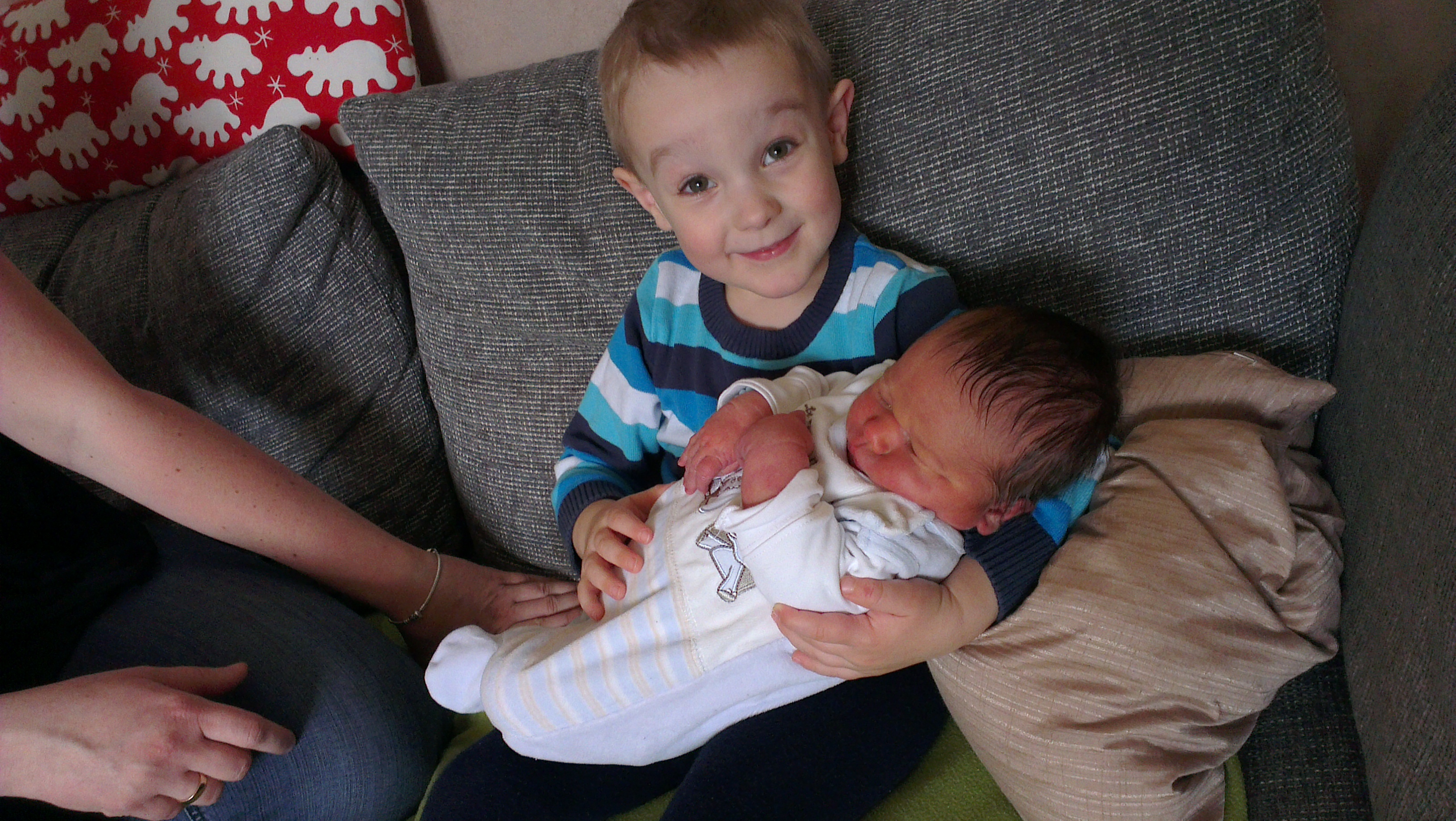 I've taken this week spontaneously leave me anyway (in hindsight and considering last night a great idea). So we have to "find" at least a few days to give us four.

It feels very familiar about in any case. I'm curious about how it will proceed.