I imagine the question pretty often lately, at least regarding the blog content here. A clear 'target group' there is no yes somehow. If you think back, that everything here was created, then that was intended but rather as a diary for the rest of the family, so that they are always up to date.

After the wedding and the 2 births, the contributions are me but sometimes almost too private. Here I must again consider how I handle this in the future. Maybe I'm even an anonymous blog on WordPress, where I can write something "free". If you sometimes critical open question things is always some complicated. But due to the fact that I have anyway still no concept, I need enter here Yes now also stop on it.

Then I give but quickly take an overview of 3 days of parental leave: 😉

We were on Wednesday with Timo to parents talking in kindergarten (no, who has eaten nothing out, do that regularly). It was a really interesting conversation where we could learn so much about our child. So currently has Timo on fun and not, like many others his age 2-3 things "specializes". What but clearly was that he is a "child of the movement" (haha, it never occurred to me ;-)). That he lately very often says that he does not want in the kindergarten, is probably typical of the period between "small" and "large" kindergarten. As we had worried really many that Timo has ever said on the way to kindergarten in the car: "Me is as boring in the kindergarten". Makes you wonder first of course, where the child knows the term itself. But after some time a then somewhat queasy if you then"bring it".

On Friday we were with Mika at the orthopaedic surgeon to the Rudolfinerhaus. Is everything alright. The deviation from the norm is in the 2 degree range and is not critical. We have a follow-up appointment in 4 weeks.

Saturday family was S. M. to visit and Timo has been huge.

For lunch there for the very first time, homemade steak. They were super tasty, and were then grilled potato salad:

Our goal is Barbecue Bible Yes, as much as possible of recipes from the Weber"according to cooking, while my parents. 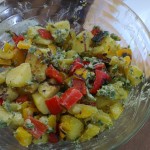 And because we have even the Weber ceramic plate in the closet, my decision for this morning was: we make pancakes! On the grill! 😉 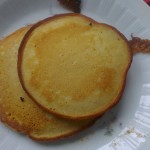 Super tasty and super fast. And the kicker: each page takes only 2 minutes on the grill. 🙂