Whoosh, another week has gone! Unbelievable! And I still can’t believe that I really have took me to write a post here each week. Well today it worked once again.

Here the topics this week:

1. So actually that should have been in the last week review, but that would have gone beyond the scope. We went last week with the guys and a another family, which lives in our house, to the Irrland. No, that has nothing to do with Ireland, but is a farm (or at least it was a guess), which now offers a huge range of outdoor activities and game options. Among other things, where old airplanes are built, in which you can climb inside and then leave via slides. There are also many barbecues which can be used freely. Me, as one who uses only gas grills, had some doubts, when I thought about making a „real“ fire. It was then but but better than expected and we got fed up 4 adults and 4 children 🙂
In the park there are a lot of water play facilities. Big highlight was the mega water slide for the two older boys. However, their faces were ridiculous, as they slide down into the water (that had at maximum pipe temperature and that at nearly 28 ° C outside temperature).

On the way to the large water area, we passed the main entrance, and I heard with a conversation of people behind us where it was, therefore, that they said at the box office, the Park was completely crowded. But people were allowed to enter more and more, our „backers“ were not so sure what they should do with this info. How this overcrowding will look like, I saw some minutes later:

Here again in the long shots: 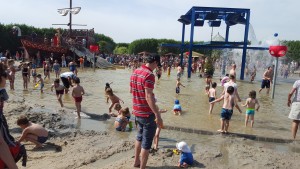 After we had arrived at home without major incident, the neighbor boy, was stung by a Wasp with (and thereby the critters had thousands of ways during the day). Timo was sitting right next to him, and is now slightly traumatised. He wants to go inside, as soon as he sees fast flying insects.

2. On Tuesday, we had them perform the second vaccination against meningococcal B at the pediatrician. This time Mika has cried briefly (the last time he has not even flinch batting) and Timo had his first cardiovascular collapse in his life (if he got that from me, then that will not have been the last time :-)).
Tini was rather glad that I was there, because with 2 children, the situation would become somewhat complicated.
Timo had to then lie down a while and again drink and consume glucose. When the doc came to see how he’s doing, Timo was sitting again. The doc then: „Hey, you can sit again! Do you like a Bonbon? „, and it echoes from the background „Mika also wants a Bonbon!“. That was great, because it was Mika’s longest previous sentence. And of course to this topic. Well, as one say: you don’t inherit something from strangers 😉

3. On Saturday morning we had some errands to make. As we came in the middle of the day, we ate locally and spontaneously considered to let Mika take a nap in the car and to go to the Zoo to Wuppertal. We have never been there, and the experience shows that half an hour sleep super fits for Mika. The Park is beautifully landscaped and beautifully shaded (quite well even on hotter days). We have borrowed a stroller us, what relatively quickly turns out to be a fail, because one would have come to the clue, that there are not only Valleys, but also the mountains in Wuppertal, Germany. 😉
However, we had luck, because Mika walked almost the entire time (and that was a very long walk) but then the handle of the stroller came off, luckily no kid was sitting in it at this moment. There was a screw, which makes the drawbar in length, extendable and which was loosely. With the hikes there, that could have been really bad with fully occupied stroller. After we had noticed that, we have then addressed the animal keeper in the next enclosure and they have helped us tighten the screw.

The Wasp plague unfortunately has quite hit the Zoo, too so that Timo was more and more restless. Finally, he wanted to go in the houses no matter what animals were in there. We had entered the human monkey house just for 10 minutes, as they announced that the House now closes. The time had passed as in the flight and it was already close at 18:00. So I explained Timo that the monkeys sometimes need peace and we had to go now. He understands that quite well, and we went, completely finished but happy, home.

4. Today was so finally ready, we have Mika’s bed (so actually Timos former bed) converted into a „large boys bed“. To put him to bed was quite uncomfortable with the old bars, and due to the fact that we had taken out the bars on the side, it was clear that the kid probably will be satisfied. So we went from: 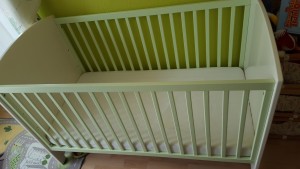 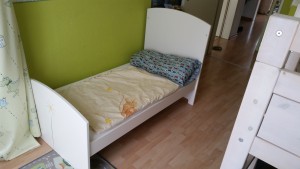 Safety first was the motto and Mika has already a good awareness for that topic, because Tini brought him the helmet and put it on his head, but he has recognized relatively quickly who really works here and needs protection:

Well I have done the whole build in the past and this time I did also complete without instructions (it’s really not that hard). What I have completely forgotten, and what suddenly came back into my mind, was the fact that the French, who had designed this bed, have a penchant for something like that here: 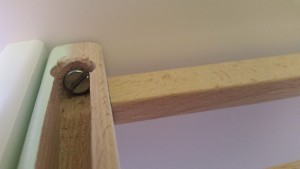 Nearly every available screw on this bed is a slotted screw. They can be nice,if you have both hands free, and so the ability to stabilize the screwdriver. However they make you mad, if you hold the slats in one hand and then tried to move the screw with the other hand. And if you you do next time it funny when you guys look, complete with a hex wrench together build the furniture from a Swedish furniture store, then let’s be careful, there’s dengeln a piece of furniture together still methods around the world that are a thousand times „sicker“. The here for example:

The pin the hole is plugged with loose in that and must be (if ever so much is possible) pulled out after each quarter turn and re-plugged. This may seem so still reasonably doable, if the screw as shown on the image to see on the ground is facing page. The bed has but 2 pages and also 2 screws that Nice had to be turned „upside“. I was happy that Timo will has played outside in the garden, because otherwise the curse Fund would have filled (we have the bad words) complete one afternoon 🙂

So then, see you next week. And if you had maybe even blatant experiences with building of furniture, she writes it down in the comments. 😉