I've thought over time a new section. To me a bit more motivate to write here more regularly. I'll try every week to write the topics that are left in memory. Not only in relation to the children, but rather more generally held. Because I myself yesterday already not could Rouse, the week in review begins only once on a Monday. Maybe I move the whole thing again later on Sunday.

So this week following topics have invaded me:

1. The holiday began with the guys actually already in the week before that, but they were there with your mother on the Baltic Sea. Well they have survived the time and that was the final conclusion: jo, with the two you can camp been well run. Tini and I have done so over many years and we are pleased it to bring this "adventure" the kids.
We pick up but still the us, this year of still times square terms to Mallorca and next year goes away perhaps even further, before we classified in the rhythm of the school holidays.

I've grabbed then last Sunday the two and drove with them to our parents. Grandmas and grandpas are super important (me at least) and therefore we are trying to take to drive in the direction of "homeland," on us as often as possible. There's also discovered and experience. It began with the Aviation Museum in Wernigerode. Both children Yes fully depart on aircraft (from whom they probably have that * cough *) and there you could look right jets up close and sometimes touching. For me, who now is "at home" in the telecommunications sector, was the top crackers, the telephone switchboard installed in the cellar. There the boys were with each other phones from "grannies times" (dial) to call. The Museum is not very big, but worth definitely time to drop, one morning you can get out there already. 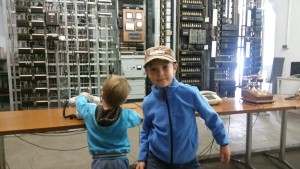 In the afternoon we went to the animal park in Halberstadt. Always a worthy goal. Animals and our guys are Yes a very reliable combination for a relaxing day. 😉
The next day we went off the only sensible way to make the day, but heavy rain and sunshine alternated at 20 minute intervals in the Bauspielhaus to Thale, which was.

On the last day, it was again in a zoo in the Aschersleben. Even though I am Yes in principle from the area, I was not aware that there are even White Tiger (I had never even seen). 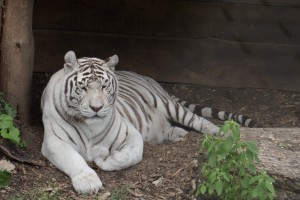 The day went well in the fly around and on Wednesday was back then to Neuss. As the summer festival in Mika's Kita took place on the same day I had to wake up morning the guys, so that we would get more or less on time. That worked very well and I was really amazed that we had no single dam on the 420 km, and that during the week. OK, I could also not really quickly go, were still 3 bikes on the roof and all the baggage of the Baltic Sea holiday in the trunk. 😉

All in all was wonderfully relaxed and I imagine, that the guys have enjoyed the 'Daddy time'. Mika has discovered the climbing for themselves in the holiday and Timo cares, if he is not tired and obnoxious, touching to his little brother. Is already something that warms the heart one (sorry for the cheesy phrase, but otherwise I can not put it) to see the two play with each other.

2. Killing the lion Cecil has caused an outcry all over the world. I understand relatively late, only by a Tweet by Arnold Schwarzenegger, who somehow was washed in my timeline:

According to the tweet researched I briefly what it is at #5ForBigCats goes and then quickly found the message that a dentist from the United States has killed the most famous lion in Zimbabwe. Actually, you may not hunt in the National Park, so the "hunters" with a lure from the reserve attracted him to hunt him then. When all the endangered animals on this earth (and that there are very many of them, you will actually learn since the 3. or 5. Class in each school), I can not understand it, that people with hunting gear on a plane set then after hours flight on the prowl to go, so they an another animal of this planet remove wall for their trophies. Here the tweet sums it actually quite well:

If you have children, you already wonder how you leave the world for them. I've done this before, perhaps unconsciously, but since the children of the world, I think about it often, as it can to ensure that they don't grow up in a world such as in Mad Max. I catch myself too often this that I recognise that I even not lost away things. Most intense me remains in memory, how I have fished similar from the 9-degree cold Baltic Sea a line or something, when we were in May there. Clearly I was thinking nothing, except maybe: if it goes back into the sea, is himself that never saying "dismantle", because it is made of plastic. If I out fish's I make this world a tiny bit cleaner. I mean for no other reason is a young man who wants to free the oceans from plastic waste. And if I can here to make a contribution, then I'm with there too. Yes relatively easy starts, where you each time a plastic bag at the shop in the hand lets express.

3. Also another issue in Germany, the refugee policy is always disturbing. There's away about one on the one hand the really needing help, and on the other side of the envy in the country that go with soft washed would on the streets and take my "foreigners". This stupidity, will lead still real ruckus, I'm sure. A few years ago, the issue escalated once before in Rostock, for example. There exactly same hollow phrases were lit by the people (I would not call them Germans) threshed and then the foreigners home in the collective. All meeting participants drum stood around and watched.
What really scared me, is the fact that some posturing already in our acquaintance – / kinship has arrived. There, it is claimed that the refugees first into a phone shop run to buy the latest smartphones.
Or it is whispered conspiratorially: "Did you hear back there now a refugee home is to be built on the site!".  And it starts with exactly such statements. From there it is not far away, up to the "foreigners out".
And if you look at the first argument, it is even relatively easy to explain: when I would be taken refuge somewhere and maybe had to leave my family, but the first thing I would be, to build up a communication. And who now comes with the argument: "there enough ' ne phone booth", which should even consider where exactly he has seen the last of this telco Dinos. Clearly it is now pure speculation and an attempt, but in my opinion the sounds as plausible as the argument: that take the work away from us. 😉

4. A manufacturer with which we work has an interesting Kickstarter project has to go. This involves a box, on which you can hold video conferences. It is with the box in principle to his own provider. I find one ingenious thing, because if you live separately, yes a possible use case would be easy even with all at the same time to discuss for example time that call grandparents on the "Big" screen and things that you otherwise explain every single. Something like that would be also for planning parties, etc. very helpful, because it spared some mails, that and go, because you can directly discuss ideas. So, who does want to support the project and maybe even soon want to be owners of a Spreedbox click here.

So, that it was actually by and large. Would be cool if the one time or another gives feedback, whether the format as "Rock" or whether it can get away 😉
Perhaps you have even an opinion on the topics above.